More than 20 juniors and seniors enrolled in the AP® Government and Politics seminar joined teacher Phillip Kantaros in a experiential learning opportunity in the nation's capital earlier this month. 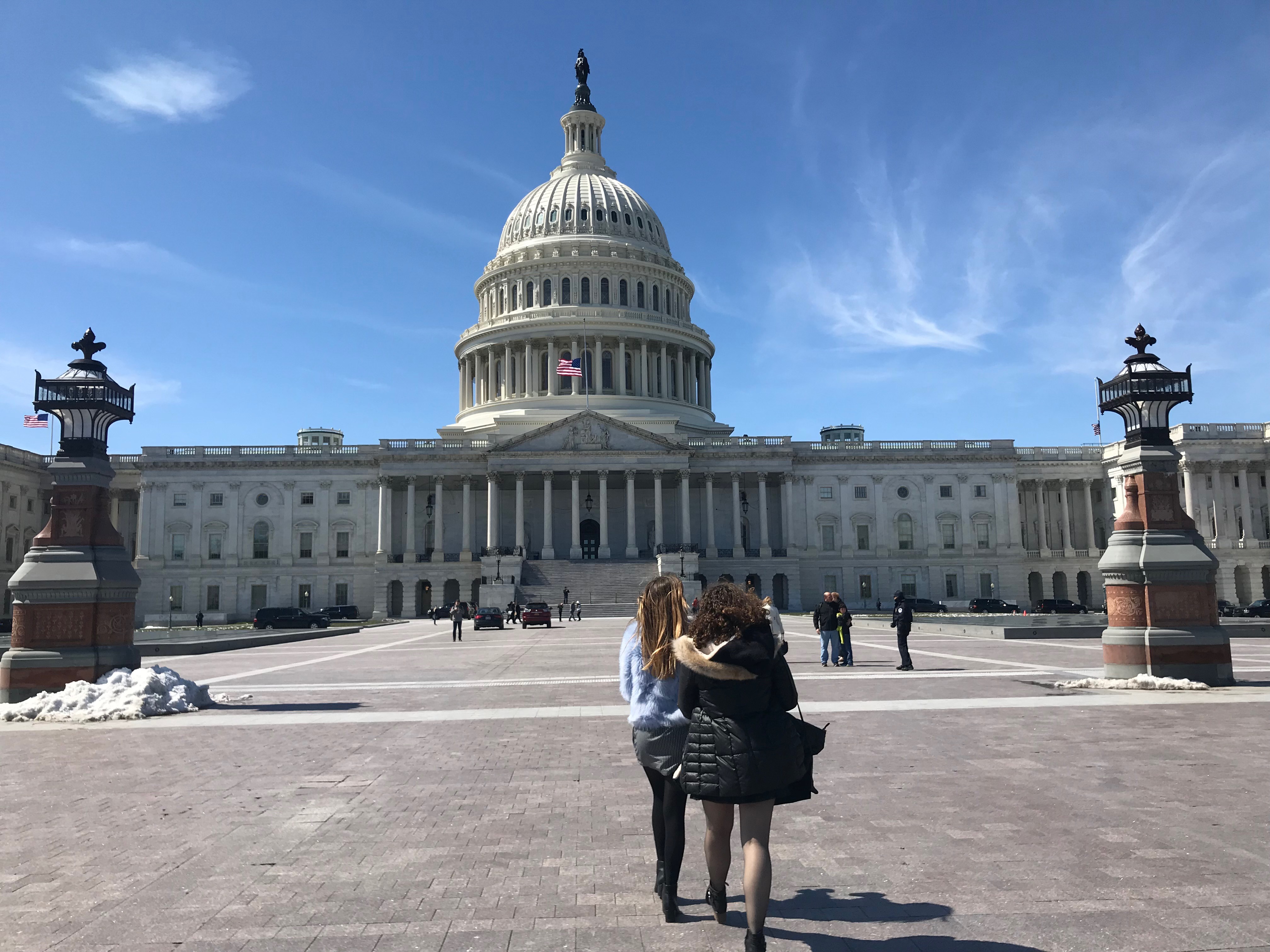 The two-day trip consisted of an action-packed agenda of meetings and discussions with key officials at the State Department, Capitol, Woodrow Wilson International Center and the BGR Group.

As Kantaros explained, "The objective of the trip was to have students meet individuals who are making a difference in Washington in a variety of different ways, whether it be making, influencing, or implementing policy, while at the same time gaining a more impactful and nuanced understanding of the federal government in action — beyond that which can be found in any textbook."

With that in mind, students set out to participate in a foreign-policy simulation at the State Department. In their meeting with Marti Estell, a career foreign-service official and senior advisor to the U.S. Diplomacy Center, the students quickly appreciated the rich knowledge of Spain and Latin American countries she brought to the simulation, a realistic immigration and refugee crisis that allowed our students to engage in policy-making exercises. The experience showed the complexity of negotiating with parties that are often hostile to one another. Kantaros said, "It was really insightful to experience first-hand the struggles diplomats work with every day when trying to create unique resolutions to seemingly intractable problems."

During a visit to the Capitol, the group met with Paul Irving, sergeant-at-arms for the House of Representatives, who has served several presidents during his 25-year career in the Secret Service. Irving shared insights and information about his key responsibility: keeping the 435 members of the House of Representatives safe. Reflecting his extensive knowledge of technical and physical security, Irving held the students' attention as they discussed the challenges of such a complicated job. Students then toured the Capitol, seeing the offices of Speaker Paul Ryan, Minority Leader Nancy Pelosi and other members of Congress.

At the Woodrow Wilson International Center for Scholars, students met with Haleh Esfandiari, a native of Iran who serves as the director of the center's Middle East Program. The meeting with Esfandiari, through her own personal narrative, built upon the classes' study of Middle Eastern affairs and insights gained from the recent campus visit of former U.S. Ambassador Stuart Jones.

Esfandiari left Iran in 1980. During a return trip to Iran to visit her ailing mother in 2007, she was arrested and held for six weeks, during which she was repeatedly interrogated and told to confess to anti-government activities. She then spent over 100 days in solitary confinement in the notorious Evin Prison before being released and allowed to return to the U.S. While she has come to terms with her own experience, she said, she is still hopeful Iran will ultimately make liberal reforms similar to the reforms the students have been studying in class.

Martha Zaytoun '18 said of that meeting, "A distinctly strong woman, Ms. Esfandiari told her harrowing tale of her time in Iranian prison with grace."

Students then visited the BGR Group, a service agency which uses staff members' senior-level congressional and executive-branch expertise to lobby for public policy. Hosted by Lester Munson, an expert in U.S. foreign policy and national security, students learned a lot about a lobbyist's job. Students talked with Betsy Woodruff, an investigative reporter for The Daily Beast writing about the inner workings of the government. Students also met with Maya Seiden, a Democratic lobbyist in Congress, and David Boyer, who leads BGR's health and life-sciences efforts.

"We had the good fortune of meeting many influential people during our trip to D.C. who shared their work in government and politics with us," Kantaros said. "Each one impressed upon the students the difference they can make and how important young people can be in Washington."

Below, students and teacher Phil Kantaros (at right) during their visit to the State Department. 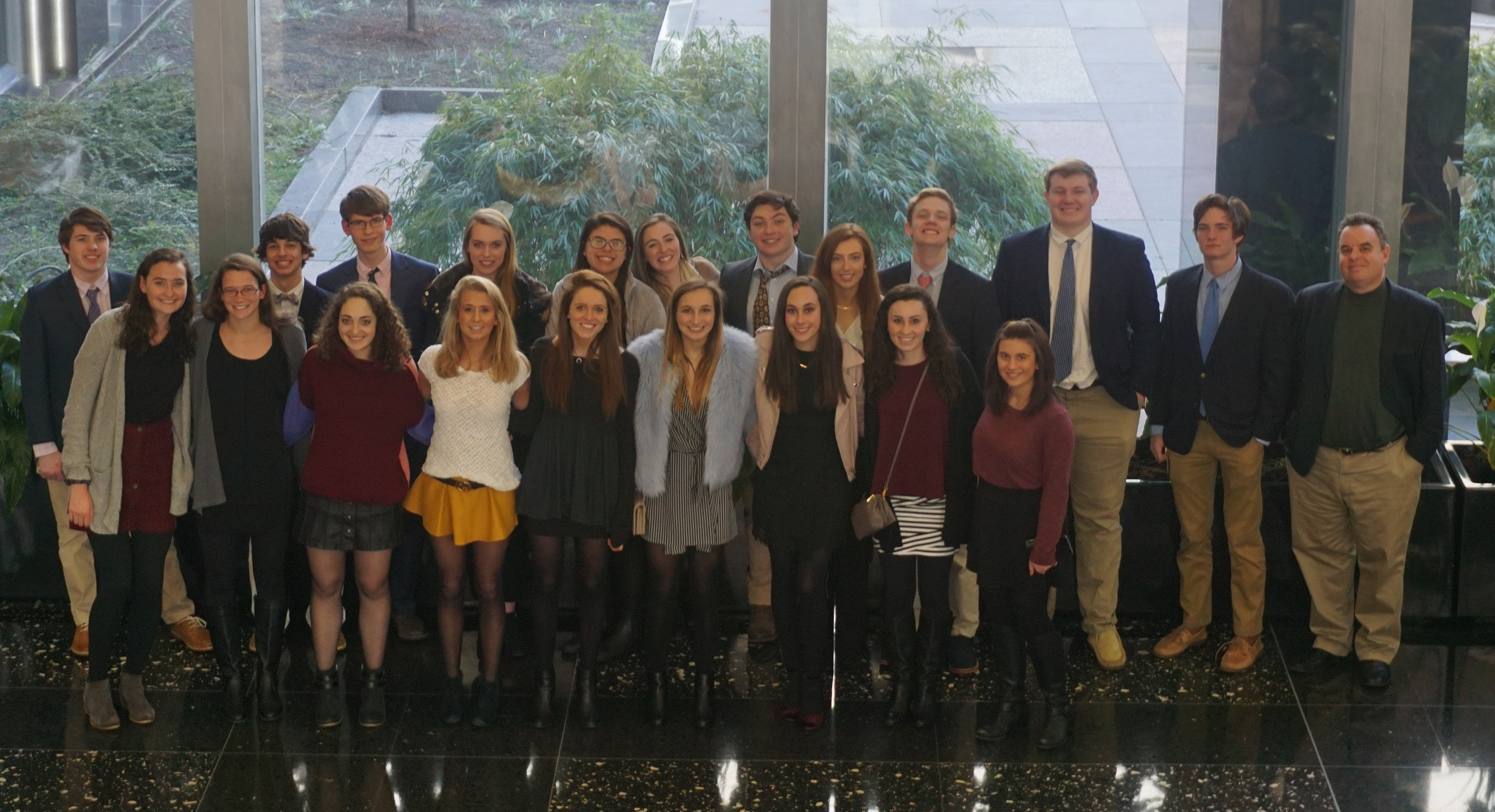