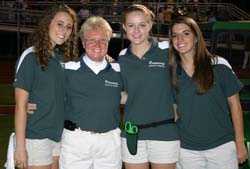 Piette has contact with each of the 50 athletic teams at Ravenscroft. In addition to her duties with all these teams, she teaches an Upper School sports medicine class which produces the team of student athletic trainers who assist Michelle in the treatment and supervision of all the medical needs of Ravenscroft’s student-athletes. While many coaches leave behind a legacy of wins and championships, Piette’s legacy is the dozens of students who have gone on to study sports medicine in college, many of those who then made sports medicine their careers.

Her duties at Ravenscroft have even taken her beyond the campus as she served on the North Carolina Independent School Athletic Association Board of Managers for eight years, and was also appointed by the Senate Pro-Temp to the N.C. Board of Athletic Trainer Examiners in 2006. She is currently serving her second term on the board.

Piette was inducted into the Ravenscroft Sports Hall of Fame in 2006 and has also received the school’s prestigious Helton Award for Teaching Excellence.

Piette was nominated for the award by the Athletic Trainer at Cary Academy, David McAllister. For more information about the award criteria or the N.C. Athletic Trainer’s Association, visit http://www.ncathletictrainer.org.